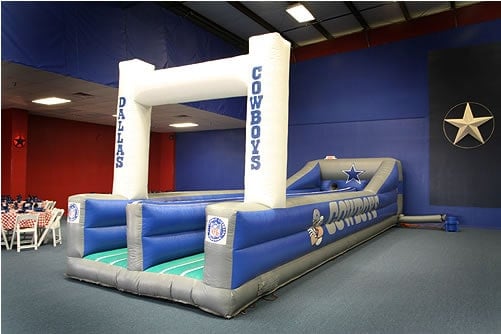 Someone had to be sideways to think this up. It’s a horizontal bungee football game that defies physics and sets everyone in sight to laughter. The game takes place along an inflatable runway, featuring two cushiony race lanes measuring 12′ wide x 7′ high.

Two Race Against Each Other Strapped to Bungee Cords

Two contestants strap on bungee cords and run full tilt down the lane, trying to stick their Velcro markers on the far wall – without springing backward in the process. The first one to stick their marker on the wall wins.